The 10th generation of the venerable Mercedes-Benz E-Class is a lesson in old world luxury and enough modern technology that the car is almost capable of driving itself.

Daimler staged the global reveal of the 2017 E-Class in Detroit on Sunday night, the eve of the 2016 North American International Auto Show.

The midsize luxury sedan is longer than the previous model, with a muscular front end and single-piece taillight.

For the U.S., the car will go on sale this summer with a turbocharged 2-liter, four-cylinder gasoline engine with 241 horsepower and 273 pound-feet of torque. Mercedes said there will be more engine choices later. There will be diesel engines for Europe; a plug-in hybrid is expected down the road.

The car has a nine-speed automatic transmission and the suspension offers sport and comfort modes as well as introducing a new air suspension system to automatically control the ride height depending on how fast the car is going to improve ride and fuel economy.

The seats can be heated — along with the door armrests, center console and steering wheel.

"The E-Class is the core of the Mercedes-Benz brand and in the past has repeatedly redefined the standards in the business-class segment," said Thomas Weber, head of Daimler's Group Research and Mercedes-Benz Cars Development.

"The new E-Class takes another major step towards fully autonomous driving," he said.

The optional Driver Assistance Package Plus will accelerate, brake, steer and change lanes for you. The "Drive Pilot" follows traffic up to 130 m.p.h.. as the "Steering Pilot" reads the surroundings and reacts accordingly. Put on the turn signal and the car will change lanes for you if the lane is clear.

The automatic braking system watches for vehicles coming at cross streets and can stop the car to avoid collisions. The car also has evasive steering assist which augments the driver’s steering input in sudden maneuvers to avoid an accident.

The audio system even emits a carefully designed sound when a collision is imminent to cause occupants' eardrums to tense, reducing the likelihood of ear injury from the noise of a collision.

It is arguably the most technically advanced luxury car on the market. Daimler has received a license in Nevada to test the standard production E-Class as an autonomous vehicle. Other automakers authorized to test in the state have all been research vehicles.

Pricing for the 2017 model has not been announced. 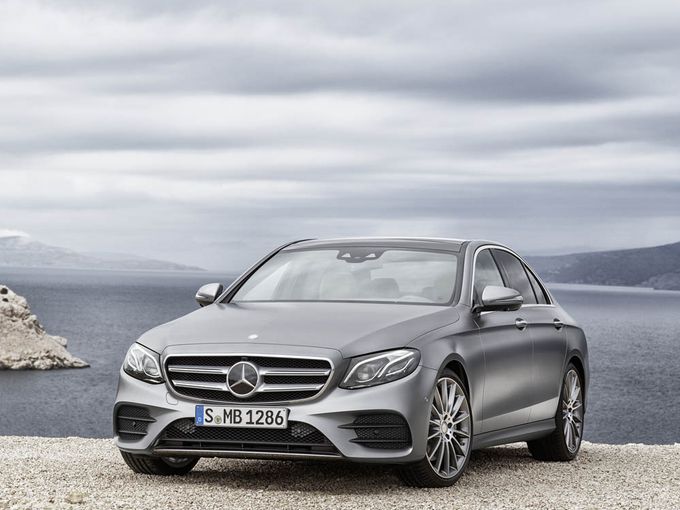